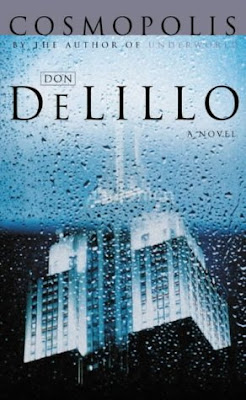 Cosmopolis is a strange bird. I was expecting a sprawling, big-cast realistic novel, the kind by Tom Wolfe, Jane Smiley, and Jonathan Franzen that I adore. And, boy, is that not Cosmopolis, which is more short story than novel, not at all a work of classic realism, and takes place within one car ride on one day with, essentially, only one character.

That character would be Eric Packer, a young, brilliant, extremely rich financier, who spends his days being chauffeured around Manhattan in a limo. He has an “asymmetrical prostate,” as the doctor who inspects it every morning tells him, and it’s a phrase, a condition, a fear, that shimmers in the background of Eric’s days, never far from his thoughts. He’s also invested heavily in the yen, which is not behaving as expected, a phenomenon that he can’t quite understand and his refusal of which to accept is bankrupting him minute by minute over the course of this particular day. Add to this continued threats from an anonymous, deranged ex-employee, an unconsummated marriage, and the repeated appearance of his young wife all over the city as his limo driver inches along the streets of Manhattan, seeking an out from the gridlock that has seized the city.

This is not my favorite type of novel. Set in a superficially recognizable world, that world tilts just odd enough to feel surreal rather than realistic. The characters’ actions seem nonsensical, again just outside the realm of the plausible. It reminds me of Murakami, in fact—that same mix of the mundane and the bizarre. The language can be exasperating: “Her beauty had an element of remoteness. This was intriguing but maybe not.” It’s the kind you can play Mad-Libs with: “Her beauty had an element of _______. This was _______ but maybe not.”

Cosmopolis simply isn’t the kind of novel that I like best. But if I turn from my platonic ideal of the novel and take it on its own terms, I see a work of art that is carefully structured, with a unique tone and thematic layers and riffs.

It’s a work that is essentially poetic in nature. Plot points and dialogue turn not on their likelihood or realism but on their evocativeness and their efficacy in carrying forward the themes of the novel. One central theme is that of understanding. We, like all generations, are born into a historical moment that we try to make sense of. And Eric Packer is obsessed with sense-making. He tries to understand the markets (why does the yen keep climbing?), his marriage (why won’t his wife sleep with him?), his self (why are his financial instincts failing him?), the shape of his prostate (does “asymmetrical” mean weird or fatal?), the alignment of planets at his birth, the nature of language, the messages from his would-be assassin, the news-ticker in Times Square, words uttered without context, the man on fire on the sidewalk, and everything else along the way.

On construction workers sitting and eating lunch on the street, watching the pedestrians: “The workers were alert for freakishness of any kind, people whose hair or clothing or manner of stride mock what the workers do, forty stories up, or schmucks with cell phones, who rankled them in general.”

On the social contract of walking the streets of New York: “Eye contact was a delicate matter. A quarter second of a shared glance was a violation of agreements that made the city operational.”

But most typical are passages of weird poetic sensibility, allusive and thematic, like this one that touches on Eric’s vacillating attraction to danger. He specially designed his limo to protect him from the outside world: it’s lined with cork to keep out noise, plated with bulletproof materials, and has unbreakable glass in the window, glass that begins to show fracture lines as the day wears on. This mobile office is spacious but he allows only one visitor at a time, parsing out his exposure to danger as well as his time and attention. Nonetheless he often stops the limo and jumps out before his bodyguards can stop him, and he has an ambivalent reaction to the noise that has begun to penetrate his Limo World:

“They sat in the swell of blowing horns. There was something about the noise that he did not choose to wish away. It was the tone of some fundamental ache, a lament so old it sounded aboriginal. He thought of men in shaggy bands bellowing ceremonially, social units established to kill and eat. Red meat. That was the call, the grievous need.”


Danger is linked to desire, and Delillo’s careful wording plays on yen as both the Japanese currency and the English sense of longing and desire:

“‘We’ve profited, we’ve flourished even as other funds have stumbled,’ she said. ‘Yes, the yen will fall. I don’t think the yen can go any higher. But in the meantime you have to draw back. Pull back. I am advising you in this matter not only as your chief of finance but as a woman who would still be married to her husbands if they had looked at her the way you have looked at me here today.’”
“He sat down long enough to take a web phone out of a slot and execute an order for more yen. He borrowed yen in dumbfounding amounts. He wanted all the yen there was.”
“‘You made this form of analysis horribly and sadistically precise. But you forgot something along the way.’ ‘What?’ ‘The importance of the lopsided, the thing that’s skewed a little. You were looking for balance, beautiful balance, equal parts, equal sides. I know this. I know you. But you should have been tracking the yen in its tics and quirks. The little quirk. The misshape.’ ‘The misweave.’ ‘That’s where the answer was, in your body, in your prostate.’”

Another theme, a kind of sub-theme of understanding, is that of language and its inadequacies. Language is littered with relics of the past that have no “saturation” or real meaning in the globalism, the “zero-oneness,” of the new world:

“He was thinking about automated teller machines. The term was aged and burdened by its own historical memory. It worked at cross-purposes, unable to escape the inference of fuddled human personnel and jerky moving parts. The term was part of the process that the device was meant to replace. It was anti-futuristic, so cumbrous and mechanical that even the acronym seemed dated.”


The unrelatedness of language to the world applies to the art and tropes that make up our cultural language:

“I’ve seen a hundred situations like this. A man and a gun and a locked door. My mother used to take me to the movies. . . . He stands the way I’m standing, back to the wall. He is ramrod straight and he holds the gun the way I’m holding the gun, pointed up. Then he turns and kicks open the door. The door is always locked and he always kicks it open. These were old movies and new movies. Didn’t matter. There was the door, there was the kick. . . . Whenever it happened as a parent and a child I used to tell her that whoever made this movie has no idea how hard it is to kick in a sturdy wooden door in real life.”


Delillo packs his novel with philosophy and allusion: Eric’s attempts to shield himself from risk, the randomness of phenomena, the nature of time, the yen, the noise, the prostate, and it’s all artfully done. But is it good? The traditional binary of literary virtues is the mirror and the lamp: the mirror gives us self-insight, and the lamp exposes us to the minds of others. But Cosmopolis works more like the stun gun, the crème pie, the poem, all of which jolt us out of our everyday consciousness. Eric admires poetry, which “bare[s] the moment to things he was not normally prepared to notice,” and his asks his bodyguard (after having sex with her) to blast him with a literal stun gun, just to see how it feels.

And the crème pie. An experienced “crème pie assassin” has been after him for some time and finally catches up with him on this day. He tells Eric of his other conquests: “I crèmed Fidel three times in six days when he is in Bucharest last year. I am action painter of crème pies. . . . I quiche Sultan of fucking Brunei in his bath. They put me in black hole until I am screaming from my eyes.” This is the yen—for feeling, for fresh experience, fresh eyes, that drives the characters. And drives the novelist too, whose fresh weirdness makes for a memorable read.