Longbourn and the Bull of Wall Street 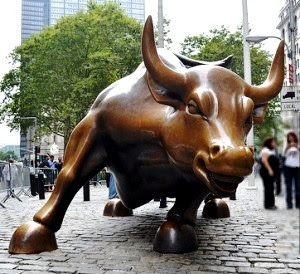 As I was thinking about Jo Baker's appropriation of Pride and Prejudice for her novel Longbourn, another work of art came to mind: Charging Bull, the great bronze sculpture by Arturo Di Modica near Wall Street in New York. Right from the start, this iconic work became a tourist favorite. People the world over come to take pictures beside it. Installed in 1989, it was intended by the artist to represent the optimism and vigor of Wall Street.

Somewhere along the way, however, things took a turn.

Who knows who the first person was to sit below the bull's haunches and grasp its monumental balls, but doing so has proved to be an irresistible temptation. For millions. Some go further and "explore the artwork" in ways I can't bring myself to detail.

I'm not sure how Di Modica feels about the indignities visited upon this noble creature by enthusiastic tourists, but I do know how he feels about the second sculpture that was installed just a few yards away from Charging Bull in 2017. In March of that year, sculptor Kristen Visbal placed Fearless Girl, a smaller bronze of a girl with hands on hips, directly opposite Charging Bull. Visbal has said that girl is intended to look strong and proud, not belligerent. Nonetheless, many viewers perceive her as standing in opposition to the bull with a look of defiance that turns the bull, as Di Modica claims, into a villain, a symbol of greed and aggression. 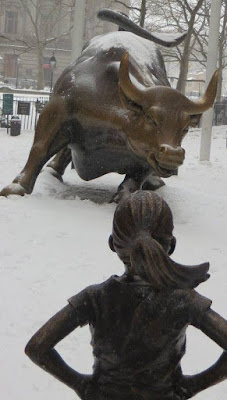 Di Modica feels that he has been forced into a collaboration that he never agreed to, and he has asked that Fearless Girl be removed, since it intrudes upon and subverts his work. But whether she is read as a companion piece sharing strength and optimism with the bull or as a kind of David to the bull's Goliath, there is no doubt that Fearless Girl is just as beloved as Charging Bull. Do Fearless Girl's quality and popularity override the Di Modica's intention? Can the two pieces still be perceived independently, without the shadow of one being an inescapable part of the other?

Interestingly, both pieces originated as a kind of guerrilla art. Both were installed without permission under cover of dark, and both survived their illegal installation only because of the instant love they garnered. In 2018 New York mayor Bill De Blasio announced that Fearless Girl would be moved to another site near Wall Street, citing safety concerns because of the hundreds of people who are daily gathered around tiny Bowling Green Park, where the statues were situated. The move happened in December 2018, and it appears that, because of Di Modica's incessant threats of legal action, the two may be permanently separated. It will certainly be a long time before they are separated in American cultural memory.
Email ThisBlogThis!Share to TwitterShare to FacebookShare to Pinterest