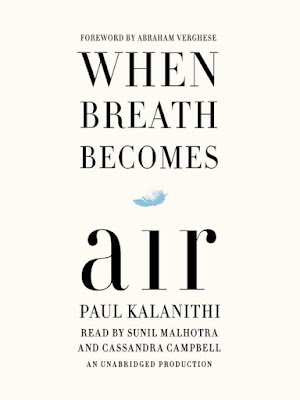 It's impossible for me to write about this memoir as anything but a person with cancer. Paul Kalanithi was a talented neurosurgeon who was diagnosed with lung cancer in his mid-thirties and died two years after diagnosis. In the last year of his life he wrote this memoir. He's a good writer, but for me the value of his book is in those moments of recognition along the cancer journey.

The state of mind that Kalanithi tries to convey is the one that has dominated my own mind since I was diagnosed with stage IV ovarian cancer earlier this year: confusion. It's hard to even relate what the confusion is—it's that confusing. There is nothing new, in a way. None of us know how long we will live. All of us know that we are way behind the eight ball in achieving our dreams.

But the imminence and certainty of death throws everything into disarray. Nearly every day brings an image or idea that I have to immediately backpedal on: "I guess I'll never . . . "  get to Paris, write my book, start a career in graphic design, hike the Appalachian Trail. But that's just the beginning. There's also:  learn Photoshop, repaint the bedroom, know what it's like to live without financial worry, build library shelves, live in the country on a lake, own a little motor boat, lose weight, sit on the porch with my husband in our quiet years drinking tea and reading poetry to each other, be there for my beloved dog when he dies.

Not knowing if you have six months, two years, or six years is disorienting. Kalanithi knew how he would spend each of those time budgets: six months—quit work and spend all his time with his family; two years—write his book; six years—continue pursuing his career dream of running a neurosurgery and research center. The uncertainty manifested in him—and in me—in a reverse five stages of grief: acceptance, depression, bargaining, anger, and denial. I found this extraordinary to read about since I had this exact same thought. My first stage was utter acceptance: I'm going to die, and soon. Then depression at that fact. Then a sort of bargaining, I suppose, though perhaps not the one Elizabeth Kubler-Ross described; more of a bargaining with myself than with God or life. How much do I need to give meaning to the time I have left? Do I devote my time to fighting for the kind of world I believe in? To spending time with friends and family? To plowing through all the pleasures I'd hoped to spend my later years enjoying, from Tolstoy to Tarantino? Or is it acceptable to just sit in my recliner and play Candy Crush? I mean, who really cares, other than me, and do I really care? However I spend the days, they will be spent.

I can't quite relate to the anger stage, though that may come. But I found myself recently in the denial phase that Kalanithi described so well. After about a year of treatment, Kalanithi had a CT scan that revealed beautifully clear lungs. The mottled scan of his early diagnosis was gone, and he was looking at something that looked very much like remission and hope. He started doing surgery again. He went on an interview for his dream job. He started thinking about the future. But his next scan was catastrophic. The mottled scan and the clear scan were now replaced with a scan of a monolithic tumor that took up half his lung. I related so well to this. I'd seen my blood markers fall from 1150 to 38, the latter number well within the under-50 normal reading. I began to think that this was an illness, like the flu. Something to get through. Kind of no big deal. I suppose it may still turn out to be that, but I'm not counting on it. A new tingling in my fingers or the caginess of a doctor's response and the knowledge of reversals keeps me aware.

Kalanithi comes to some conclusions about how to give meaning to his life in these tragic circumstances. For me, however, the greatest value of his testament is how he documents the disorienting difficulty of that when the very bedrock of meaning—time and future—are removed from the equation.