The Mountain between Us 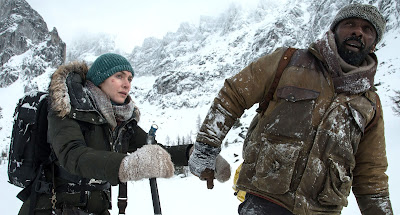 I'm a fan of the wilderness survival genre in film, so this movie was a must-see with Kate Winslet and Idris Elba starring. Elba plays Ben, a neurosurgeon, and Winslet plays Alex, a conflict photojournalist. Both are stranded at the top of a mountain in the Rockies when their prop plane goes down. Alex is badly hurt, Ben less so. After some back and forth, they ultimately decide that help is not on the way and they will try to go down the mountain together to look for help.

Like most of the critics, I found it to be a good movie, not a great one. The cinematography was beautiful, but the biggest surprise was the script, which went light on some of the movie cliches about a man and woman thrown together. The two were strangers at the beginning and they acted like it, polite but not chummy. They chit-chatted like you do with acquaintances, neither hostile nor overly intimate. There were no overreactions, no stupid arguments, no undermotivated blow-ups.

At first I wondered about Ben being the neurosurgeon and Alex, the woman, being the severely injured party. On the surface it looks like a repetition of an old dynamic in which the man is competent and the woman is helpless but feisty in a way that is both nonsensical and allegedly charming. But my fears were quickly dispersed. Alex is a war-hardened professional photographer and is tough in her way without being a capital-T Tough Lady. They interact like equals, and Alex ultimately gets her moment of saving Ben as well.

Most importantly the script allows Alex to be Helpless While Female. That is, her injury doesn't reek of femininity, doesn't have a gendered feel to it, and neither does his medical competence. This is tricky in the way that so many artistic decisions are in an era of sincere attempts at acceptance and equality. Is it okay for a woman to be portrayed as dependent on a man? Is it okay for a dyke-y lesbian to be the villain of a short story? Can non-gay comics joke about effeminate gay men? It's a tightrope but, in terms of the male/female dynamic, I want women to be allowed to be weak or injured or just average. One romance novel writer said that she allowed her heroines to be in need of help or healing from the male lead because, although it echoed the old damsel-in-distress trope, doing otherwise put the heroine in the position of always serving to nurse the needs of the hero.

Here's how I would put it: The film was non-gendered. You could have flipped the gender of the two leading roles without it feeling off. And that's a rare experience in the movies.