Here is the list of recommendations for good audiobooks from my friend Debbie Justice. 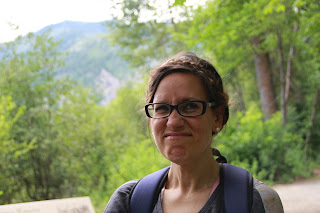 Deb, when exposed to bad writing

Debbie listens to a lot of audiobooks (she's a marathon runner), and she is also the best writer that I know. Even a seemingly plain request like “Send me your favorite audiobooks” results in a mini-masterpiece like the following:

Books Both Well-Written and Well-Produced Audiobook-wise: In No Particular Order

Wild, Cheryl Strayed—THO: a cancer tragedy features, so avoid if this will eff with your peace of mind.

all Malcolm Gladwell—He's right up there with Ta-Nehisi and Barack in amazing self-narration.

As You Wish, Cary Elwes’s delightful recollections of filming The Princess Bride

Between the World and Me, Ta-Nehisi Coates

Shrill, Lindy West’s memoir—hilarious and smarty-pants. Best combo.
anything narrated by Anna Bentinck, especially the production of Jane Eyre she did

Orange Is the New Black, Piper Kerman (I was so impressed with this voice actor)

Love, Nina, Nina Stibbe—next-level funny; this would be my first pick for you.

Crocodile on the Sandbank Elizabeth Peters—tho u will have to navigate some effed-up racism that was sadly invisible in 1980-whatever to this otherwise forward-thinking author.

Unbroken, Laura Hillenbrand—Dude. This story. This guy. I mean.

The Audacity of Hope, Barack Obama—Worth it cuz he narrates it.

all the Harry Potter books—seriously, Jim Dale's narration is a revelation. He brings something completely separately masterful to this amazing series.

anything else narrated by Jim Dale

Ruth Ware’s thrillers—excellently narrated, which could possibly get you over the this-book-is-annoying-me hump; my theory is that I liked them so much more than you did because I listened to them on audiobook.

same with the Sonali Dev romances; I was really taken with the voice actor’s skill.

same w Paula Hawkins's thrillers—possibly awesomer to me than to u bec. = audio.

Sunshine, Robin McKinley—excellent sci-fi/fantasy w hot vampire, written long before Edward Cullen was a twinkle in his father's eye. U will crave cinnamon rolls I’d u listen so #Beware.

Big History, David Christian—about thirty-ish hours of Damn, Son!-level macro history; SOWORTHIT. Became famous after Bill Gates mentioned in an interview that he was making his way thru the series and was riveted. SOGOOD.

I have listened to maybe two different Lord Peter Wimsey mysteries (the inimitable Dorothy L. Sayers), by different publishers, and both productions were quality; so, worth considering; if you're not interested in the whole series, I'd say to read the ones that feature Harriet Vane (Strong Poison, then, I think, Murder Must Advertise, Gaudy Night, and Busman’s Honeymoon).

Books I Loved but Have Only Ever Read: Yet Still I Think You Should Try Audiobooking/Good Luck

Troublemaker, Leah Remini—I read this and loved it, but I can only imagine Leah’s reading of it will be superb

Amy Poehler’s and Tina Fey’s memoirs—these have to be super well-narrated, right?

all Kinsale—she hired a legit actor and is a control freak, so these have to be pretty good productions, right?

Open, Andre Agassi—either still, bemulleted waters run deep or this is the best ghost writer in the business. Either way, impressive if you were conscious during The Age of Acid-Washing.

The Writing Class, Jincy Willet—I was belly laughing; I just hope there's somewhere an audiobook production worthy of this book.

the Reverend Clare Fergusson and Russ Van Alstyne mysteries by Julia Spencer Fleming—excellent books, alternating between cold-weather and hot-weather mysteries (finally an author with a brain who recognizes the importance of body temperature as it relates to murder mystery enjoyment!!!)

Morning Glory, LaVyrle Spencer—Oh, I hope they found a good voice actor. Yearning. Heart-breaky. Poemical. Sadly, think this is a one-off coup for Spencer; I have been trying for about three-ish years to get through another of her titles, which is hoooooorribly dated/sexist/awful/blech.

Sweet Everlasting, Patricia Gaffney—Exact same as above (except for all I know her other stuff # awesomesauce. Haven’t read anything else.)

Endurance, Alfred Lancing—Of a piece with Unbreakable; astounding stories of the triumph of the human spirit and blah-blah-blah except for really.

Consider revisiting any Sittenfeld! Of course, my favorite of hers is Prep.

The John Carlisle and Lise Delorme thrillers by Giles Blunt were quite captivating on the page; I think I read maybe the first two point five? Cold weather all, if I recall.

The Gillian Flynn thrillers are likely super well-produced, right? I was really mad at how Gone Girl ended, but I still bet the rest are worth checking out.

I kind of a little bit suspect that in real life Mindy Kaling is petty, superficial, self-servingish, and Republican? But she narrates her memoirs well enough and has some fun celebrity dish.

I wonder if the Fever sci-fi/fantasy series—Karen Marie Moning—would be awesome in audiobook; I found the reading frustrating, but they have a rabid following, and maybe excellent voice acting is what's needed to bridge the persnickety reader divide; in any case, worth trying the first one as a litmus test.

Ooh! Do you think they let Carrie Fisher narrate her own books??

Podcasts that Will Make Your Life a Better Place to Live

Harry Potter and the Sacred Text is like a master’s lit seminar led by your most-ever compassionate, clever, smarty-pants friends; listen in order. They recap every chapter under discussion at the top of each episode, so no need to reread beforehand if you don’t want to. I went to a live recording of one of their Book 3 chapters last month! It was awesome.

Revisionist History with Malcolm Gladwell; if you love his books, you’ll love his podcast, tho he’s definitely saltier/judgier here (which is a delight and all oh-girl-no-he-di’int when I agree with him, which is often, because he’s very convincing).

This American Life—Ira Glass and his team always manage to tell a great story; plus, HIS BALMER ACCENT THO

Radio Lab—same (except for accent thing)

Mystery Show hasn’t posted anything since 2015, but the lone season that stands is a delightful and absurdist exploration of little, rando mysteries (like, for example, How tall is Jake Gyllenhal really? A deep-dive into a roiling Internet conspiracy theory; With a cameo by the actor himself), by one of the producers at This American Life.

If you haven’t listened to season 1 of Serial yet (Baltimore teen murdered; ex-boyfriend is in provision for it; but did he really do it?), you haven't lived. Season 2 (How the hell did it go down wi Bowe Bergdahl?) is pretty good, too. This show is what made podcast a word-thing. Another TAL producer.

The NPR Politics Podcast team has garnered a pretty damned devoted fan base since their RNC/DNC coverage last summer; they are like THEBEST dinner party w your smartest, informedest, considerate-est, dad-jokest friends ever. I love them. They made my first post-Trump foray into news not scary. Well, less scary.

Where Should We Begin? With Esther Perel—famed psychologist SOMEHOW GETS HER THERAPY PATIENTS TO CONSENT TO RECORDING THEIR REAL SESSIONS. I listened to an intro episode This American Life presented this past spring and was riveted. Episodes to be released in October. I think she maybe specializes in working with couples trying to heal after an infidelity?

Revolutions is just some amateur history buff self-nollijing like crazy on history's most notorious revolutions and Cliff’s Notesing them for us over the course of multiple episodes; I listened to maybe the first couple (starting to cover the English civil wars/House of Stuart/Commonwealth) and plan to one day get back to it. This reminded me of your Great Books: A Linear History reading project.

. . . nerding out on the Hamilton cast recording. Almost the entire show is sung, so you can get virtually the entire plot line by carefully listening. I enjoyed my first go-through, began to pick it apart in my second, and was well nigh on my way to rabidity by my third. If you enjoy it and wish to further nerd out, Lin-Manuel Miranda has published a history of the making of the musical, under the same name, ably narrated by Mariska Hargitay, and the Ron Chernow History on which the musical is based is also available on audiobook (and on my holds list at my local library).

This should get you started.
Email ThisBlogThis!Share to TwitterShare to FacebookShare to Pinterest