The Virtue of Cheerfulness

Let me introduce you to someone. This is my father: 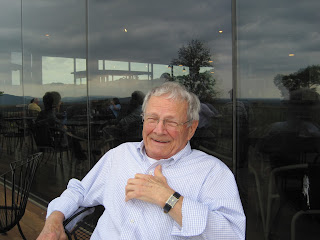 He has some faults, like all of us. Some that have annoyed me quite a bit over the years. But it is only recently that I have realized that his seemingly innate cheerfulness is not just a personality feature (one that I, sadly, do not have). It is a virtue. A moral virtue.

The day after the 2016 presidential election, I was inadvertently exposed to the official meeting between Barack Obama and the putative winner of the election. The election of an amoral fraud and narcissist was devastating to me, and the fact that Obama would have to shake his hand and make nice . . . it made me ill. Still, I watched the clip, dreading what I would see.

What I saw was so improbable: Barack Obama looking as chipper as ever, conducting himself with grace and self-possession. And as I watched him, I felt something I didn't expect: a lightening of my heart. I hadn't realized till then how fearful I was of the devastation that Obama must have felt. Nor how critically important his lack of devastation would be.

In the months following the disastrous political travesty of Trump's election, I have mostly been depressed—and kind of militantly so. My war-weary liberal friends would post on Facebook with a forced tenacity that we couldn't crumple, that there were people in the world who needed us to be fierce and fight for them. I was all, Eff that—I'm crumpling. Something terrible has just happened. Can't we take a minute and mourn it?

But then I think of Barack Obama on November 9 in the White House with Trump, looking confident and unruffled. And I think of Hillary Clinton on November 9, hiking in New York and looking chill and happy with a supporter she met on the trail. And I think of my father at 90 years of age, battling sciatica and still ending each phone call with "Call me if you need me!" And I think of the doctor's office I visited today after getting lost and arriving late, and how nice and upbeat the staff was, such a balm on a difficult day. I thought of my own guilt as I've crawled inside my sadness for weeks on end, and my husband who still always has a smile and a sympathetic ear, no matter how high up the laundry piles and how many times a night he has to listen to me sigh like a martyr.

Cheerfulness is powerful because it lifts people's spirits. And when their spirits are raised, people feel like they can fight another day. Cheerfulness puts a mosquito net around our own pains and tries, as much as is practical and healthy, to protect those around us from being stung a hundred times a day by our misery. Cheerfulness acknowledges that the world is more than us, that whatever we're feeling and going through, others have their own worries and cares and joys and jobs to do.

I'm not good at cheerfulness. And I'm cognizant of the way a melancholy temperament can free people to be open about their own sadness, to let down their guard, to feel like they don't have to be striving and winning every damn second of the day. But I appreciate cheerfulness, the expression of a resilient spirit that rallies us to change.