Moby-Dick and the Virtues of Straight Talk 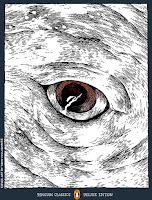 The Left's relativism and postmodern sensibility have been turned on them. After decades of preaching about the bias implicit in every source and message, we found our ideology successful beyond our dreams, to our horror. Fox News railed against the mainstream media's bias and asserted the legitimacy of their abject partisan nonsense—and it was only the gateway drug to Breitbart and InfoWars and all their despicable brethren. It turns out there is such a thing as truth and objectivity, and the surging subscription rates at the New York Times post-election show how keenly we on the Left have come to appreciate the importance of affirming that.

The fractured and competing narrative voices of contemporary novels are legitimate in their own right. We all see the world differently—just ask any pair of siblings about an event from their childhood, or last week even. Our minds are entire universes but parallel ones, or rather oblique ones, where the overlap in consciousness and perception is always partial. The stream of news, flowing into our heads from radically different sources, only mirrors the stream of perception in general. And the differential in those streams of perception are nothing compared to the terrible, beautiful, radical difference of our minds.

But despite the honesty of the postmodern  project, I can't help but wonder if the annus horribilis of 2016 will yield an artistic return to simpler narratives and affirmations of objective reality. I find myself shying away from the flip, jaded voices of new fiction and turning toward what feels like the solid ground of classics. Moby-Dick, my most recent read, is the most postmodern of non-postmodern novels (some refer to it as "pre-postmodern") for its humor, pastiche nature, variety of mental states, and debatable realism, and yet it feels sturdy and reliable and rich. Those ropes and winches and anchors attach us to a real experience and provide an escape from the paranoid fantasies of a new type of Other. What are the limits of empathy for the Other when those Others are chanting "Lock her up" and saluting like Nazi sympathizers and asserting that Obama is a Muslim ("and no one will convince me otherwise!") or a one-time male prostitute in Southeast Asia?

If bringing to life the variety of experiences in the world and learning to inhabit the consciousness of others was one of the artistic tasks of the late twentieth century, then perhaps rediscovering our connection to reality and objectivity—without retreating into a simplistic reductionism—will be the artistic task of the decades to come. Relying on satire won't do; for all its brilliance it alienates the Other in a way we can't afford. Because artists are artists, it probably won't take any form we can predict. But a turn must be coming.

There can hardly be a more important mission at this moment. A few days ago a man of right-wing persuasion burst into a DC pizza parlor with his gun blazing because he read on a website that Hillary Clinton was running a child sex ring from its premises. I couldn't help but be reminded of Voltaire's warning: "Those who can make you believe absurdities, can make you commit atrocities." Finding a path back to a shared rationality is critical to preventing more.
Email ThisBlogThis!Share to TwitterShare to FacebookShare to Pinterest