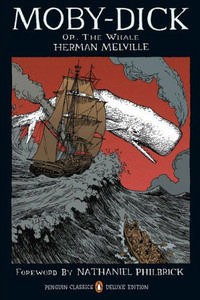 I always imagined Melville's prose to be staid and stately. What I found is that it's is much more like Tristam Shandy than The Scarlet Letter. Dude is ALL over the place, in the best way possible. In lesser hands his style might be chaotic or confused, but every piece of it is brilliant by itself and works brilliantly as a whole.

Example: After a normal chapter of exposition, Melville opens the next chapter like a play. The chapter is written like a script, where one by one sailors (or groups of sailors) say their piece, like this:


PORTUGUESE SAILOR.
How the sea rolls swashing 'gainst the side! Stand by for reefing, hearties! the winds are just crossing swords, pell-mell they'll go lunging presently.

DANISH SAILOR.
Crack, crack, old ship! so long as thou crackest, thou holdest! Well done! The mate there holds ye to it stiffly. He's no more afraid than the isle fort at Cattegat, put there to fight the Baltic with storm-lashed guns, on which the sea-salt cakes!

4TH NANTUCKET SAILOR.
He has his orders, mind ye that. I heard old Ahab tell him he must always kill a squall, something as they burst a waterspout with a pistol—fire your ship right into it!

ENGLISH SAILOR.
Blood! but that old man's a grand old cove! We are the lads to hunt him up his whale!

This particular bit of dialogue may not convince a reader that Melville's a genius, but here's a little further on. Two soldiers have gotten into an argument and are about to fight. The other soldiers have made a circle around them, egging them on:


BELFAST SAILOR.
A row! arrah a row! The Virgin be blessed, a row! Plunge in with ye!

OLD MANX SAILOR. Ready formed. There! the ringed horizon. In that ring Cain struck Abel. Sweet work, right work! No? Why then, God, mad'st thou the ring?

So a fight commences in a ring of onlookers, and Melville writes, "In that ring Cain struck Abel. Sweet work, right work? No? Why then, God, mad'st thou the ring?" Has there ever been a more perfect literary union of philosophy, context, and character than that?

And then Melville finishes off the chapter with this final soliloquy in the voice of a black boy sitting by himself in the ship, having overheard the dangerous plans to pursue the White Whale. I can't begin to parse the racial currents in this novel, but it's hard to think of another great writer of his era sending this raucous chapter by plummeting to the lowest member of the crew—a child no less, and a black one—so poignantly taking up his consciousness, and in one moment showing the cost to the powerless of the foolishness of the powerful:


PIP (shrinking under the windlass). [...] Blang-whang! God! Duck lower, Pip, here comes the royal yard! [...] But there they go, all cursing, and here I don't. Fine prospects to 'em; they're on the road to heaven. Hold on hard! Jimmini, what a squall! But those chaps there are worse yet—they are your white squalls, they. White squalls? white whale, shirr! shirr! Here have I heard all their chat just now [...]  it makes me jingle all over like my tambourine—that anaconda of an old man swore 'em in to hunt him! Oh, thou big white God aloft there somewhere in yon darkness, have mercy on this small black boy down here; preserve him from all men that have no bowels to feel fear!