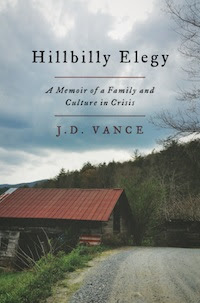 Recently Robert Reich shared a link to an interview on The American Conservative website with the writer J.D. Vance. Vance grew up in Appalachia in poverty and has just published a book about Appalachia called Hillbilly Elegy: A Memoir of a Family and a Culture in Crisis. The topic at hand in the interview was why poor whites support Trump, but Vance discusses much more than that.

Vance talks about the challenges facing the type of poor white communities that support Trump. Poor whites are one of the few demographics that you can still mock with impunity. Multiple social crises plague these communities—drug addiction, loss of jobs, family violence. And poor rural whites often like Trump because Trump sounds like them: he's not political or careful. Trump "actively fights elite sensibilities" and spurns the condescension that has been poured on them for decades.

Vance also talks about the virtues of these communities—about his grandmother and others in his community who were admirable and decent and interesting. He notes that the Scots-Irish culture of honor is deeply rooted there. These people aren't stereotypes or cartoons; they are individuals who are persevering amid terrible circumstances and who have rich, worthwhile lives.

Where he falters, I think, is when it comes to politics. There's a strain of criticism in recent years toward liberals who think of themselves as such humanitarians but are revealed to be prejudiced jerks. The 1997 film Waco: The Rules of Engagement is a case in point. The filmmaker toured the country taking down prosperous liberals who sneered at southern idiots who joined David Koresh's cult. The novel The Emperor of Ocean Park by Stephen L. Carter skewered white progressives for their hypocrisy and hidden racism. Vance has a bit of this. While Republicans put too much emphasis on personal responsibility and values, ignoring the role of economic hardship and throwing up their hands at the cultural problems, he takes liberals to task for dismissing the agency and dignity of poor whites.

These are not equivalent faults, however. Vance tips his hat at Ta-Nehisi Coates and admits, "Too many conservatives look at that situation, say 'well that’s a cultural problem, nothing we can do,' and then move on.  They’re right that it’s a cultural problem: I learned domestic strife from my mother, and she learned it from her parents.  But to speak 'culture' and then move on is a total cop-out. There are public policy solutions to draw from experiences like this: How could my school have better prepared me for domestic life? How could child welfare services have given me more opportunities to spend time with my Mamaw and my aunt, rather than threatening me–as they did–with the promise of foster care if I kept talking? These are tough, tough problems, but they’re not totally immune to policy interventions."

As for liberals, he offers: "Neither are they entirely addressable by government.  It’s just complicated." Liberals tend to look to economic solutions: to provide financial support and to throw money at schools.  He warns that you can throw money at school, but that won't solve problems if the entire culture is permeated with family violence and drug addiction. In addition, liberal handouts are insulting to a people for whom honor and dignity are so important.

The longer I thought about this, the angrier it made me. It's unfortunate that "handouts" are humiliating to receive, but financial help is better than no help. Schools absolutely cannot make up for toxic home environments, but they can at least provide basic skills and a safe haven and maybe even decent air conditioning and heat and plumbing–and yes, even life skills to avoid repeating the mistakes of past generations. A culture of honor, even if it has roots in "Scots-Irish" heritage rather than ghetto street values, is nothing to be admired, especially if it results in scapegoating and short-term emotional payoff at the expense of long-term well-being.

It's also unfortunate that poor whites respond to these challenges by scapegoating foreigners and Muslims and progressives, who are actually the only ones attempting to understand and address their problems. Vance claims that neither party has done anything to help these communities, but that's patently untrue. It is consistently liberals who try to implement policies to help people help themselves: addiction counseling in jail, early childhood intervention programs, vocational training, safe lead paint removal. Vance claims that poor whites are humiliated by the "Bush/Obama" foreign policy and military failures, that they join the military in disproportionate numbers but that their experience in the army leaves them nothing to be proud of. Well, I'm sorry that we can't conjure up a just war so that people can feel good about their military service; that's a ridiculous thing to expect. And the military failures are, again, not equally the fault of Republicans and Democrats. One party got the US into an untenable fight, and another party recognized it and got us out.

Vance says early on in the interview: "We need to judge less and understand more." That is precisely the liberal ethic, one that is broadly mocked by conservatives. Liberals are both more idealistic and more pragmatic than conservatives: We believe that we can observe reality, try out practical measures, and see what works. The point is not that culture isn't important–it's everything. But you can't wave a magic wand and change culture. So instead you chip away at the things that might affect culture, things that you might have a chance at influencing: jobs, health care, drug addiction, law enforcement reform. And you, ideally, don't let ideological biases get in the way.

I see ideological biases in conservatives when it comes to issues like legalizing pot or providing easy access to contraception. Vance sees ideological bias in liberals when they fail to admit that troubled communities are characterized by both poverty and single-mother households. He sees this as a turning away from facts and reality–his only example. But liberals de-emphasize single-mother households for a good reason: they are a symptom, not a cause. And in any case, single mothers aren't the problem; absent fathers are the problem. In communities like these, mothers stay and fathers don't. If you don't think women should have children unless they're married, please remember that a marriage license does not create commitment; rather commitment creates a marriage license, or at least something equivalent. Simply bemoaning a culture of single motherhood doesn't help anything. But supporting access to birth control and women's choice does.

I also see ideological bias in statements like these: Vance says, "My biggest fear with Trump is that, because of the failures of the Republican and Democratic elites, the bar for the white working class is too low.  They’re willing to listen to Trump about rapist immigrants and banning all Muslims because other parts of his message are clearly legitimate." I find this statement absurd: that Trump's hostility to immigrants and Muslims is somehow tangential to his appeal. As Vance himself acknowledges just a sentence or two later: "A lot of people think Trump is just the first to appeal to the racism and xenophobia that were already there, but I think he’s making the problem worse." There we can agree.

Vance sees Democrats and Republicans as failing equally when it comes to addressing his native culture. But it takes some fast dancing to make this stick. He seems to have evangelical Christian beliefs, so maybe he has a religious and cultural attachment to conservatism that makes it hard for him to own up to the unequal failures of the two parties. Because, trying to understand? Liberal. Trying to help? Liberal. Avoiding mocking vulnerable demographics? Liberal. And arguing that poor whites can be excused for making bad decisions regarding politics because they feel condescended to? That's a much greater insult to their agency and dignity than anything liberals have offered.