Two Notes on "The Witch" 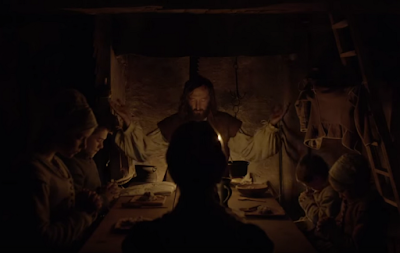 Note 1:  The movie The Witch has gotten crazy good reviews, and it is indeed a compelling, suspenseful movie. Superb acting, cinematography, symbolism, and more. It's uncomfortable viewing because it's so creepy but also because it's based on a colonial New England folk tale, which means that it's all about the dangers of women's sexuality and is obsessed with women's bodies. The movie adopts this point of view—that women are scary and not to be trusted—because it is retelling the folk tale as its 17th-century audience experienced it, not as we today might interpret it. It's absolutely brilliant at putting moviegoers inside the mindset and worldview of these Puritans. (I recommend this book for those interested in delving further into what it felt like to live back then.) But it's a weird sensation to be asked to give yourself over to a story that embraces that woman-fearing point of view so deliberately. 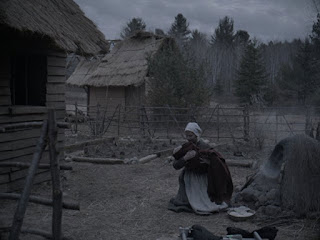 It's also maddeningly objectifying. I'm of the opinion that there should be more nudity in film, but we need less of this type of nudity, which is focused on either the horrors of the aging female body or the delectability of the young female body. The opening shot is of the beautiful, angelic face of the prepubescent Thomasin: 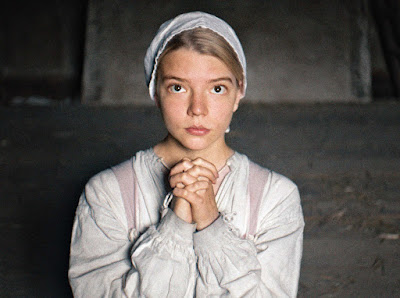 And the minute you see that face in the first seconds of the movie, you know that you will end up here: 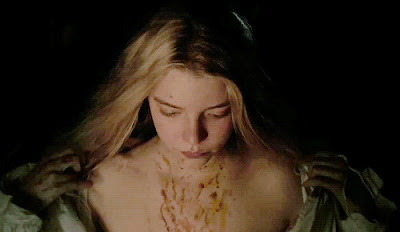 So inevitable, it's disappointing.

Note 2: The little twins Jonas and Mercy are the most hilarious, brilliant, hateful, lovable, scary characters in the movie and fully deserve the joint Oscars for supporting actors that I expect to see them win a year from now. I mean, just look at these two:

If they don't scare the bejeesus out of you, nothing else in this film will.