"A God in Ruins" by Kate Atkinson 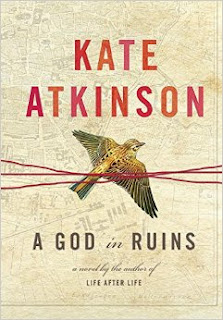 Kate Atkinson's latest novel, A God in Ruins, arrived to great acclaim. Having read several of her mysteries along with her literary novel Life after Life, I was intrigued. Life after Life was cool: the story of a woman's repeated attempts at survival, as the universe puts her through a series of do-overs in which she gets to avoid the mistakes that killed her in previous lives.

A God in Ruins follows the (single) life of another character from Life after Life, a young Englishman named Teddy who becomes a fighter pilot in World War II. For most of the novel you flit back and forth in his life, from his courtship of his wife, who is bright and clever but whom he doesn't quite fully connect with, to their difficulties with their daughter, who grows up to be a bit of a mess and incessantly hostile to her bewildered father. There are lots of scenes from the war as Teddy grows into his command and guides his team on missions.

There's no doubt that A God in Ruins is an excellent, traditional literary novel. It's written in the style of everyday realism and puts the reader right in the middle of its historical era with great period detail and psychological insight. For me the traditional realism kept it from being anything more than a very good historical novel, and the jumping around from youth to old age to middle age and so on is a trick I tired of the very first time I saw it used in a novel; it's such an automatic generator of pathos (here's the person in the throes of youth, and oh look, here they are as an old person whose dreams never came true) that it feels like a cheap shortcut. I've read the carefully observed period novel a hundred times, so, while I enjoyed the story, a tiny bit of me was thinking, "Why am I reading this?"

Then the ending comes and there's a twist. No doubt this twist makes the whole novel even more moving for those who liked it. It's a good one and it's effective, but here's the problem: It is the exact same twist that appeared in a very famous novel from about ten or twenty years ago that was highly acclaimed, in part because of this very twist, which was a first at the time. This older novel was a phenomenon: the book equivalent of a celebrity among those who read fiction. It took place in the same time period, featured a young man thrust into war, followed a fairly traditional line of realism in its narration (with some notable, incredible expansions of the form), had great psychological acuity, and ended, in the very last pages like Atkinson's novel, with this same revelation. Kate Atkinson, in a postscript to A God in Ruins, goes into unusual detail about the process of writing the novel. She talks about the twist and how it fits into literary theory and also about all the authors she borrowed from in terms of writing about the war. But she never mentions this other author, the one who famously created this very original twist.

Atkinson's borrowing from and lack of acknowledgment of this other author (I'm trying not to say "rip-off") kind of tanked the novel for me. I don't even know if my snooty dismissal is fair. After all, 99.99999 percent of novels use the same forms and techniques as other novels, and that doesn't bother me. In fact, 99.99999 percent of everything is a rip-off of something else: clothes, verbal expressions, music, this blog post. Maybe it's just the fact that what Atkinson borrowed from was so singular. In clothes, if you design a wide-leg pants, no one's going to bat an eye; but if you design a short, square jacket made of pastel tweed with fringed edges, you're going to get called out for lifting it from Chanel.

In the end, what was well done in the novel felt not very special; and what was special felt like a rip-off. As much as I love realistic fiction of this type, it isn't where truly great writing is happening now. For that we have to look farther afield, for those authors who are expanding the form and pioneering new modes of expression (*cough*davidmitchell*cough*).

Spoily Note: The novel that first displayed this twist is Ian McEwan's Atonement. The novel traces the wartime journey of a couple who had been forced into dire circumstances because of a childish deception on the part of the woman's young sister. At the end of the novel, you find that most of the events of the novel never took place because the couple was killed early on in the aerial bombing of London. The young sister grew up to be a novelist and wrote the story that the reader has just finished as a way of imagining what their lives might have been if they had survived—and as an atonement for the irreparable harm that she caused them.
Email ThisBlogThis!Share to TwitterShare to FacebookShare to Pinterest