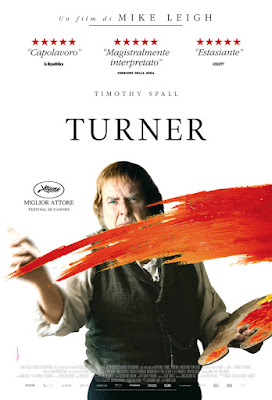 The movie Mr. Turner is Mike Leigh's twelfth film, but it feels like what all his films feel like: another installment in a great, lifelong project of documenting human life. Some films are historical (like Mr. Turner and Topsy-Turvy) and some are contemporary (like Secrets & Lies or Another Year). But every one seems devoted to reproducing social life rather than presenting a theme or even a story. A few of his movies have something like a theme or lesson: the durability of family in Life Is Sweet and All or Nothing, the need for openness in Secrets and Lies, or the delicate balancing of social generosity with personal happiness in Another Year and Happy-Go-Lucky. But mostly they feel like slices of life, and it's hard to even know why that is so satisfying to watch—but it is. Enormously satisfying and moving.

Mr. Turner portrays the later life of J. M. W. Turner, the English painter known for his impressionistic seascapes. He putters around his London townhouse, meets up with his father, checks out the latest academy exhibit. We have little way of knowing if what the movie portrays is what life was really like in late nineteenth-century England, but it feels like it, maybe more than any other historical movie I've seen. For about the first fifteen minutes of the movie I really couldn't understand what the characters were saying because they were talking in, again, what at least sounds like authentic nineteenth-century English. The language and the relationships aren't translated to our own time's vernacular; instead we are invited to observe their vernacular.

Timothy Spall won the best actor award at Cannes the year the movie came out, and he is utterly believable and immersed. He's also genius at portraying the way all of us are not just one person but many different social persons. He is thoughtless with the maid, free and affectionate with his father, a bit of a showman at the gallery, and all these personae feel like authentic aspects of the same man. 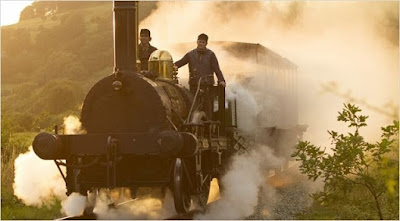 A scene from the movie. 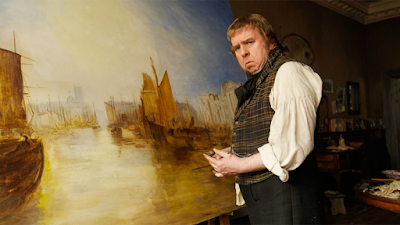 A Turner painting in the movie.

Of course, being a film about Turner, the second most important star of the film is cinematographer Dick Pope, who was nominated for an Oscar for the film. Many outdoor scenes are reminiscent of Turner's own light-filled visuals, but it's not all gauzy light and beauty. There's intimate indoor lighting and neutral street scenes as well. Mike Leigh is also genius at mise en scene, specifically composition. So many shots were reminiscent of Vermeer and Dutch painting in general that my mind kept calling them out as I saw them. This provides the pleasure of recognition and also replicates the particular pleasure that Vermeer and Dutch painting provide. 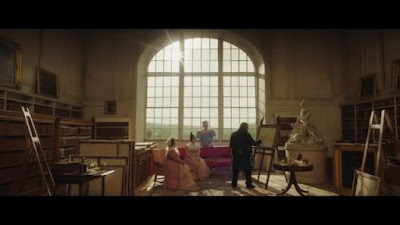 There is a famous scene in the Italian neorealist film Umberto D of a maid going through her morning routine in silence: lighting the stove, grinding the coffee, and so on. It's a justly famous scene for just the same kind of simple observation of life that Mr. Turner includes. "Observation of life" sounds like a snore-fest, but it's actually fascinating—and nowhere more so than in a Mike Leigh film. 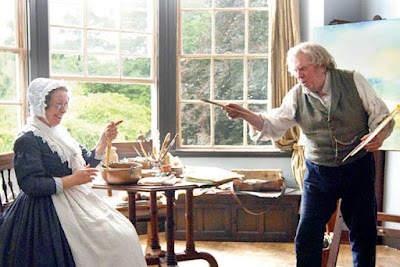