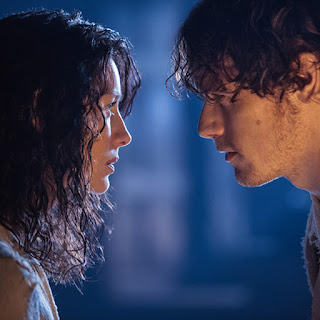 Long ago, my brother sat down with my father on a visit to watch one of his favorite sitcoms at the time, Will & Grace. And it was then, with the focusing presence of our 80-year-old dad in the room, that he realized something: Will & Grace consists of absolutely nothing but wall-to-wall sex jokes. Mostly really dirty, crude sex jokes. My brother sat frozen, not knowing whether to white-knuckle it out or admit defeat and feign a pressing interest in PBS.

A lot of our culture is like Will & Grace. It's PG-13 culture, where everything is slightly vulgar and crude. It's every sex joke on The Big Bang Theory. Every "fuck" on The Daily Show. Every boob shot in movie comedies. Not really explicit but not really clean either. An endless landscape of tepid titillation. Are we really still laughing when Raj makes a faux pas that makes him sound gay? Still finding it delightfully bold when a late-night guest pulls out the F word? Still watching scenes of sexual menace and finding it dark and edgy?

Luckily, there are outliers. These outliers exist on both ends of the spectrum: the truly wholesome and the truly adult. The Irish immigration movie Brooklyn is not a kids movie but it's clean enough that I could probably take my 11-year-old niece to it. The Age of Adaline was grown-up but free of tawdry adornment. And then there's Outlander, which shows sex of nearly every single kind (I say "nearly" because, you know, no furry sex) and multiple shots of nearly every part of the body, male and female. Repeatedly. Often. Sometimes for no good reason. It's the best show on TV.

We need both more G and more NC-17 in our art. PG-13 culture can be great, but it's hegemony is infantilizing for adults, corrupting for kids, and just boring for everyone.  G culture requires wonder, creativity, and sweetness. Adult culture requires daring, care, and beauty. This is good stuff, just waiting for expression.

V
The Vagina Monologues, Eve Ensler's iconic play featuring diverse women standing up to talk about their vaginas, has been around for a while now. I always assumed it was dated, overly militant, and/or overly . . . I don't know, goddess-y. But when my 85-year-old mother-in-law performed in it this past weekend, I get a chance to see for myself.

Turns out, it's iconic for a reason. The play is fantastic. There are a few eye-rolling moments (the woman who always envisioned her vagina as furniture?), but it is artful, creative, and moving. The monologues include simple stories, arguments, poetic word associations, everything under the sun. There are sad stories, happy stories, luminous moments, dark moments. Most important, it does what great art should do: brings reality closer. That's true whether it's a far-flung reality, like life under the burqa in Afghanistan, or a close but deep-buried one, like the yearnings of a middle-class white American woman.

The performance was at a Unitarian church nearby, and all the performers were church members. This is the second time I've seen a first-class performance at a local amateur theater. One of the best Shakespeare performances I've ever seen was of A Midsummer Night's Dream performed in a local high school gym by a local troupe that included one of my students, and it was better than the one Shakespeare play I've seen at West End. Art comes in when preconceptions are shut down.

Since the Best of 2015 round-ups are starting to emerge, I thought I'd plug my favorite novel of the year, which has shown up on the Publisher's Weekly Top Ten and the Washington Post's Notable Books lists. It is James Hannaham's Delicious Foods.

The Greatest Tale: A Mind at Work 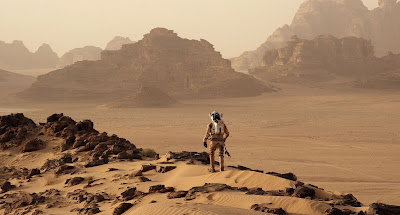 In his lovely, small volume on description in poetry, The Art of Description: World into Word, Mark Doty uses Elizabeth Bishop's famous poem "The Fish" to show how description acts as a roadmap to the poet's (or narrator's) mind. The reader sees not just the object but the route that the poet took as her eyes and mind roved over the thing being described.

The way a mind works is one of the most fascinating subjects of any art. It's there in detective fiction, with both the detective and the villain. And it's there in one of my favorite genres—one of humanity's favorite genres, actually—the survival tale. From The Odyssey to Robinson Crusoe to films like Swiss Family Robinson and Touching the Void, watching a single person (or two) confront seemingly insurmountable odds—with very few tools but one big brain—has everything you could want in art: suspense, creativity, hope, despair, beauty, loneliness, mortality.

This is the type of movie The Martian is. When astronaut Mark Watney (Matt Damon) is left on Mars by mistake, he has to "science the shit out of this." Entertainment Weekly in its review lists five other movies with a single protagonist battling a hostile natural environment: Cast Away (Tom Hanks), Moon (Sam Rockwell), 127 Hours (James Franco), All Is Lost (Robert Redford), and Gravity (Sandra Bullock). That would be a hell of a home film fest for being snowed in this winter.

There's an element of fantasy in these tales. Not fantasy as in genre; rather our own minds' craving the imaginative experience of ingenuity triumphing over difficulty. Modern novels like Neal Stephenson's Reamde and pulp like The Hunt for Red October have it. It's a bonus if the art is based on a real story like Apollo 13 or the upcoming movie on the Chilean miners' rescue. The truth is, we fail as often as we triumph (no movie yet on the Challenger disaster or the hundreds of miner rescues that failed). But that's okay. We know what failure feels like all too well. We want to experience what success looks like, what happens when resources + brain cells + persistence are combined with enough luck to defeat despair, loneliness, mortality.
No comments:
Email ThisBlogThis!Share to TwitterShare to FacebookShare to Pinterest
Newer Posts Older Posts Home
Subscribe to: Posts (Atom)