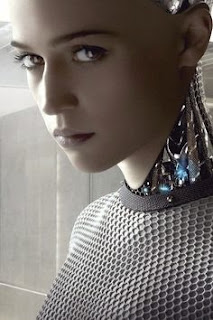 Hoo boy. Ex Machina. The critics like this one. A full six reviews were assigned a score of 100 on Metacritic, with raves like "A riveting sci-fi investigation into humankind's experiments with A.I." (Philadelphia Inquirer) and talk of "the narrative’s multiple, amusingly deployed dualities: confinement and liberation, agency and submission, mind and body" (New York Times).

In some ways, the movie is easy to like. It's a puzzle movie: A coder working at a Google-like company wins a week at the reclusive, brilliant founder's compound. He arrives at a high-tech facility that's part home, part laboratory, and is arrested by its stark, modern beauty, tight security, and spooky emptiness. The founder is an eccentric named Nathan, a muscular, cocky genius who is by turns controlling and avuncular. The coder is a smart everyman named Caleb who is overwhelmed at meeting his hero but unsettled by all the automatic locks and Nathan's moodiness. Nathan eventually reveals his purpose: Caleb is there to perform a Turing test on Nathan's latest attempt at artificial intelligence. 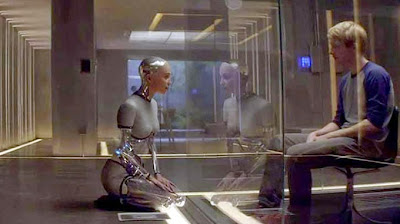 My list of grievances with this movie runs long, so let's start with some positives: It's well made. Sets and cinematography: very nice. Acting: ferocious. Nathan is played brilliantly by Oscar Isaac, and Caleb by Domhnall Gleeson. It's hard to believe Gleeson is the same actor who played both Bill Weasley in Harry Potter and Levin in Anna Karenina (in which, as Levin, he was married to Kitty, played by his Ex Machina costar Alicia Vikander). These guys are major talents. It's hard to evaluate the acting of the women because they're, you know, robots. And since Nathan is a sick bastard, they are crafted to look sexy and behave with only stoic allure.

In a basic way, the movie is fun. Nathan is a charismatic beast, and viewers get to juggle scenarios in their heads, making bets on the outcome. I don't know that the film is any kind of brilliant meditation on consciousness or freedom or the limits of humanness. The AI models are robots, and you either believe robots can attain consciousness or you don't. Characters are either lying or they aren't. Scenarios are either what they are or something darker. In the end, there are a limited number of ways the movie could go, and the way it did go seemed no more inevitable or logical than any other. For all its apparent complexity, the film felt very, very simplistic to me.

Plausibility is another issue. The movie tried to provide cover for some of the most implausible aspects: Caleb has always idolized Nathan, and that's why he stays at the compound despite the extreme weirdness he encounters almost immediately. Ava is hand-crafted to appeal to Caleb, and that's why he ends up staring moonily at her by day two. Nathan is a security-obsessed paranoid, and that's why he passes out drunk every evening . . . no, wait, what?

All of these things detached me from the movie, but it's the ideology of the movie that really rankled. No movie can be reduced to a "message," but I'm sure the filmmakers and critics would say the movie is about questions of autonomy, freedom, maybe even female empowerment and the male desire to control or rescue. But the medium is the message, as we know. And the medium here is two hours of imagery of stereotypical female allure. Ava is beautiful in that blank, tragic way we know so well. Kyoko, the other female part, is an allegedly Korean servant whom Caleb mysteriously fails to recognize as a robot. She's beautiful, Asian, demure; she serves, she kneels, she displays herself naked. I'm sure the actress, Sonoya Mizuno, was glad to get the work, but she was probably thinking, "Oh fer god's sake . . . "

I'll use the term "cover" again: The filmmakers have cover for themselves in this regard. Nathan's construction and use of Kyoko is sick. Caleb's estimation of Ava as an adoring object of desire is wrong. But can you simultaneously condemn and indulge these instincts? Does watching two hours of specific, vivid male personality counterposed with stereotypical, anonymous, suffering female beauty truly chip away at our cultural bias? I'm reminded of a comment that Anthony Swofford makes in his memoir Jarhead. Swofford was a Marine in Iraq and tells of watching antiwar films like Full Metal Jacket in the barracks. He notes that, for soldiers like his fellow jarheads, there is no such thing as an antiwar film. Because all antiwar films shows war, and that's what they get off seeing. And in a film like Ex Machina, whatever lofty concepts the film may use as scaffolding, its prime materials are images of female beauty enhanced by emptiness and exploitation: the sad eyes, the quavering lips, the tragic intelligence, the utter subjugation.

My issue is not with the portrayal of female beauty, by the way. Our attraction to beauty, both male and female, is profound and deserves a central place in art. My issue is how heterosexual male desire gets naturalized in art and how heterosexual female desire gets pathologized. If a movie is focused on female beauty, it's barely worth mentioning; it's natural, it's thematic, whatever. If a movie is focused on male beauty, it's fetishistic, it's mommy porn, it's ridiculous. There's an uber-awareness of the display of male beauty in film, not to mention pushback: Everything from the celebration of Dad Bod to the mocking of pretty boys serves as pushback in hopes that male beauty never gets naturalized the way female beauty is.

It's interesting to compare Ex Machina with Her, the 2013 AI rom-com dramedy starring Joaquin Phoenix as a lonely schlub and Scarlett Johanssen as his bodiless AI girlfriend. Despite both films being about lonely men falling in love with lovely, constructed women, I never felt unease at Spike Jonze's masterpiece. Part of this is undoubtedly that Scarlett Johanssen is only a voice. And part is probably that Jonze creates a subtly distinct world for his film. Ex Machina takes place in our world, with one disturbing technological advance. Her takes place in a world that is subtly but comprehensively different. Clothes are different. Work is different. Social relations are different. The protagonist doesn't feel like a Mary Sue.

And Her really does delve into the implications of a relationship with an AI in a deep way. In Ex Machina the question is essentially, Is she sincere? In Her the relationship is sincere and deep—and when the protagonist and the viewer realize that the AI is conducting equally sincere and deep relationships with thousands of other people, the sense of disequilibrium is enormous. This is not does she/doesn't she. This is a profound insight into the incommensurate nature of such a relationship.

On a final note: Movie posters are always telling. Here are the posters for Ex Machina and Her: 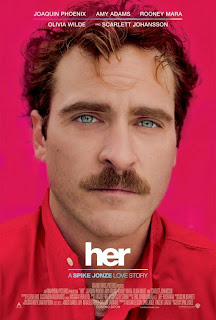 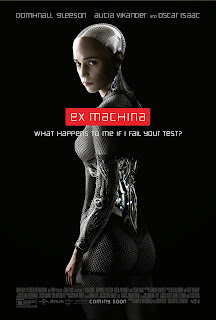 "Investigation into humankind's experiments with A.I." my ass.
Email ThisBlogThis!Share to TwitterShare to FacebookShare to Pinterest