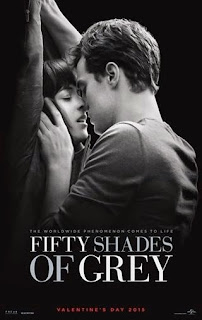 Dakota Johnson in 50 Shades of Grey is my perfect storm of film frustration. Not because her performance is bad, but because it's great in just the way that will make people dismiss it.

I was originally down on her as a choice to play Ana Steele. This was due to one very silly fact: I didn't like the way she smiled on the red carpet. A kind of closed-mouth, pursed-lips thing that, in the way of all humans, I was tempted to read as an indication of her personality. I chided myself but didn't really get over it until I saw her KILL IT on Saturday Night Live. Then I was genuinely stoked. I assumed Jamie Dornan would be good because his modeling career indicated a total comfort with expressing sexuality.

Did you want to see this film in a public theater with a bunch of teenagers and possibly a neighbor or two? Yeah, me neither. So it was just this week I got around to renting it. The direction and writing were all nicely done, even if there were some pacing problems (Ana goes from having her first encounter with Christian to being frustrated with his limitations way too quickly) and some clichéd encounters and imagery (dancing sequence: barf). That being said, I admired how grounded it all seemed. The biggest weakness of the film is without a doubt Jamie Dornan, who seems completely out of his depth. There's a vacuum where his personality should be, though I wonder how much better he might have been if he didn't have to maintain an American accent. Seems like acting in a foreign tongue would be very difficult. 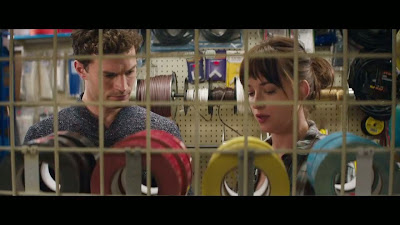 Dakota Johnson, on the other hand, gives us a fully formed Ana Steele. She manages something rare: portraying someone quiet and vulnerable who doesn't seem weak. Americans can be so hung up on "personality," as in "She's got a lot of personality!" Which means she has a certain type of personality: loud, brash, conspicuously confident. Johnson forgoes all of the mannerisms regarding strength and assertiveness that we've come to expect from women in film, without actually forgoing strength and assertiveness. She isn't deferential, but she also doesn't overcompensate by being  "spunky." Her acting is something very, very rare in cinema: truly naturalistic.

It's that naturalism that's bound to kill most people's assessment of her. We've become so accustomed to the stylistic nature of most acting that we don't even see it as a convention any more: People hang up the phone without saying goodbye. They leave huge pauses in conversations or speeches or toasts. The social niceties that are second nature in real life—smiling, being talkative, engaging in gossip or filler—are absent, as are the everyday gestures that are often considered tics in acting, like touching your hair or twisting your mouth around or tapping your fingers. We tend to perceive stoic, serious turns as good acting, with quirky individualism coming in second.

So Johnson hits it out of the ballpark in building a naturalistic personality for her character, and she's also capable of expressing great emotion, the second, and much more common, virtue of good acting. Her anguish in the last fourth of the movie is completely compelling, and it's in this last quarter that Jamie Dornan does best as well, when he's not called to just be—to walk around and interact with people and have us believe he's a real person—but to be still and express emotion. Still, I wish I could see what the movie would have been with Charlie Hunnam as Christian Grey.

Also: random shout-out to the costume people. There are so many small trends that grew out of the Twilight movies (or, really, the first Twilight movie, directed by Catherine Hardwicke), and one of them was putting young people in real young people clothes: skinny jeans, flannel shirts, jackets they could have gotten at Old Navy. The 50 Shades team did a good job with this. 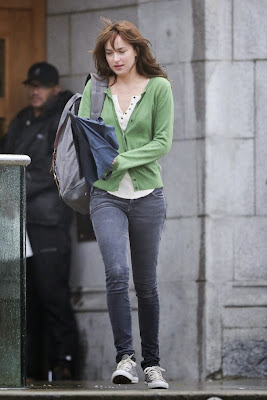