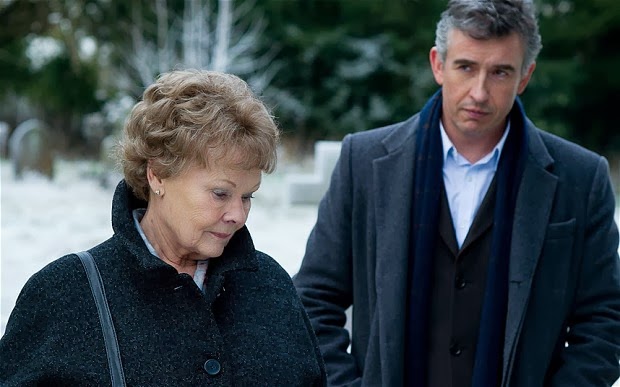 Philomena has been one of 2013's most praised films, for good reason. It tells the true story of Philomena Lee, who got pregnant as an unwed young woman in 1950s Ireland. Her family rejected her, and her father left her at one of the infamous Magdalene laundries—convents that housed unwed young mothers, kept them in indentured servitude, and sold their children to adoptive couples. Philomena eventually left, married, and had two daughters, but kept her first, lost child a secret for 50 years. When she eventually told her daughter about her lost first-born, her daughter arranged for her to meet with a struggling reporter to investigate what happened to her son.

The movie, in terms of its filmic qualities, was hit and miss for me. In Judi Dench's portrayal, Philomena's personality is a bit indistinct, and I couldn't reconcile her horrific experiences, her doggedness in pursuing her son, and her meekness and occasional uncertainty. The storytelling left some issues hanging, like Philomena's reaction to the little girl who was adopted by the same parents who adopted her own son. Philomena had known this little girl as a baby and toddler; her mother had been her best friend. And yet Philomena doesn't react emotionally toward her, doesn't talk about how she and her son had been friends as children, doesn't reminisce about the girl's mother. It felt strange, just . . . off.

This story, however, is incredibly compelling. No matter that the filmmaking isn't perfect. At times you could hear sniffles throughout the entire theater as people suppressed their crying. It was just heartbreaking. And I can't shake it. I'm home, still wondering if any of the perpetrators of these whitewashed gulags were ever prosecuted or held accountable. And for anyone who has lost a child, the film beautifully portrays the enduring pain of that loss, which never goes away and can only be turned aside from in order to get on with life.

It's a shame that the distributor felt the need to market the film as a kind of light-hearted, strange-bedfellows road trip movie: 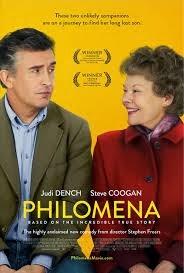 This is what I'll remember instead: