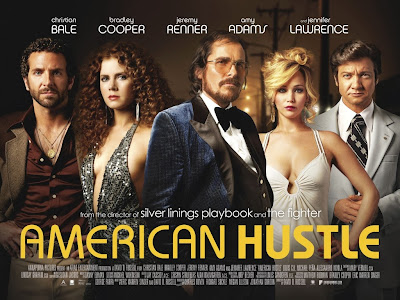 Tone is the holy grail of art. You can have decades of singers sounding like Jeanette Macdonald and Nelson Eddy, and suddenly Louis Armstrong comes along and bam: Vocals now sound, feel, a way they never have before. You can try to pin adjectives to tone (Macdonald and Eddy's tone is maybe careful, balanced, and cool, and Armstrong's unpredictable, warm, and colloquial) but individual words can't fully convey the feeling and mindset conveyed in tone.

David O. Russell's American Hustle is great for so many reasons, but perhaps most of all for its tone. A lot of films combine comedy and drama and deal in the same tropes: the intricate con job; the gung-ho guy who's in over his head; the stylish editing. But not many are this funny while feeling this tragic. The whole cast is superb, but I give special credit to Jennifer Lawrence. She's a riot, but she plays the character from her own headspace, never as just comic relief.

And the ending felt really, really sad, especially considering it's based on true events. A lot of movies of this type end with the smart guys winning and the players getting their comeuppance. But American Hustle is different. Enormous energy has been put into trying to achieve something worthy, even if those trying to achieve it are flawed. And after all that passion and effort spent, the good or relatively harmless are punished while the evil get away scot free. And you end up feeling like this is probably what most of life is, most of what all pursuit of justice is: Enormous expenditures for paltry gains.
Email ThisBlogThis!Share to TwitterShare to FacebookShare to Pinterest