"I'm Getting Married Tomorrow!" and Other Artistic Abominations 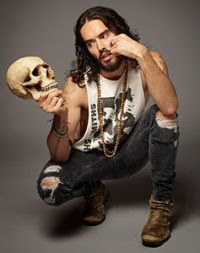 Russell Brand brought his Messiah Complex tour to DC a few months ago, and I splurged on tickets for me and my brother (for his birthday). I rarely go to the theater because of the expense, but I adore Russell Brand. His writings and stand-up are everything I love: sharp, funny, and content-ful. The ratio of content to form is generous; he packs more insight and cleverness into a paragraph than most writers do in a whole essay.

The night started out great. The stage had four hanging banners, each depicting a revered moral figure: Mahatma Gandhi, Jesus, Malcolm X, and Che Guevara. And Brand began to weave a carefully designed portrait about why each one is revered, what he relates to in each, and yet how problematic each of these lives was (in ways that all of our lives are problematic). It was brilliant.

And then the heckling began. At first I couldn't hear any of it, but Brand was addressing two men in different parts of the audience, getting the lighting team to turn a spotlight on one and threatening to throw out another. This sounds awkward, but it wasn't a big deal because Brand was so clear about it.

Then the women started, and that's where things fell apart. I don't know if Brand is just more sympathetic to women or whether what they said was less offensive, but his response was more equivocal. A woman in the first row of the balcony stood up and starting yelling, "Where's the feminine energy??!!" over and over again. Seriously, yelling at the top of her lungs. Brand was gentle: "It's okay, luv. We'll get to that. You're all right." Then she would calm down for a while, and then 15 minutes later stand up and start yelling again. At one point security came to get her, and Brand gallantly saved her. "It's okay. She can stay. You're all right, luv, aren't you?" However, she didn't seem to appreciate this gallantry and started yelling again 15 minutes later. He even tried to assure her that he agreed with her, telling her that he addresses "female energy" later in the show.

Then another woman started in. She kept yelling "I'm getting married tomorrow!" Not in the disturbing, regimental way the female-energy yeller did; more casual and random, trying to be funny. Again, Brand tries to address it comically, saying, "What do you want me to tell you?? I've only been married once and it wasn't a success."

By this time we're about halfway through the performance (or so I estimated), but things have gotten way, way bogged down. Comedy depends on timing and delivery, and the poor guy could hardly get a sentence out without someone interrupting. He juggled it as well as could be expected, but eventually it started to abrade the fabric of his performance. His rhythm began to slip. A punch line to joke or set-up would come a full 5 minutes after it was intended to. And when he did get to his riff on the beauty of female energy, it felt old and sad, like the air had been taken out of the tires. We left early because it got too painful. Most of the audience clearly disliked the heckling, but there was no stopping it.

Here's the thing: Stand-up comedy is theater. It's an actor on stage performing a script and involves everything that traditional theater does: physicality, line delivery, structure, timing.  And when heckling starts, the play is stopped and the audience is forced to watch a different play: the one that the drunk or disturbed or just rude heckler wants to perform. This heckler is not smart or funny or theatrical; otherwise he would have his own one-man show. So he seizes the stage from someone who has earned that spotlight. And instead of hearing a riveting riff on history and psychology the audience is forced to hear the heckler's script. Which is something like "I'm getting married tomorrow!"

If someone stood up in the middle of Jude Law's Hamlet and yelled this, they'd be out the door. The venue's security would have come and taken them out. No one would expect Jude Law to deal with the heckler from the stage, to placate them or put them down with just the right touch, all the while not breaking character, fielding jabs from multiple audience members and tossing them back in perfect Elizabethan English, and delivering Hamlet's soliloquy in two- and three-line bursts in between. But this is tolerated in stand-up.

The industry attitude needs to change. It has to begin with the recognition that stand-up is art. The best stand-up can be profound and even beautiful. It's work that someone spent months honing with care and pride, something they poured themselves into. Venues should announce at the beginning of performances that heckling isn't tolerated and hecklers will be immediately removed; the performer shouldn't shoulder the responsibility. This gives the performer freedom, denies the hecklers a reward for their behavior, and, most important, ensures that the people who invested scarce funds in an artistic experience actually get to experience what they came for. As it is, I doubt I'd ever go see Russell Brand again in concert, and that's a shame.