My Booky Wook, by Russell Brand 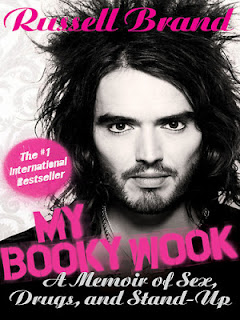 I picked up this book recently because it got good reviews and who can resist the subtitle "A Memoir of Sex, Drugs, and Stand-Up"? It ended up being one of my all-time favorite memoirs.

Its first virtue is that Brand is a great writer. This shouldn't be a surprise since he's a creative type, a comedian who writes his own material. He uses all the weapons in his arsenal: word play ("I still feel myself within the same vessel—my flesh a rocket of which I am the captain and chief cosmo-naughty"); metaphors (of a nice neighborhood man who was a possible father figure but whom he alienated as a boy: "I never spoke to that old man again. I closed down that account which could have been quite rewarding"); and brilliant imagery ("Toddlers can't move properly in winter coats; they're like little trussed-up Hannibal Lecters scanning the world with their eyes").

Best of all is his mix of high-brow and low-brow, which comes out just right. Of his gerbils, who began breeding out of control and eating their young, he writes: "The second generation stuck rigidly to the Old Testament model and ballsed Eden right up." And being a young teenager in gym class: "I hated them showers and that cold thigh-slap bonhomie, me trudging about all pudgy and unloved on some hard pitch, while other kids excelled, brilliantly occupying their newly masculine bodies."

A second virtue is that Brand is a thoughtful observer, and the care he takes with writing means that his observations are memorably rendered. I like this passage early on: "We all need something to help us unwind at the end of the day. You might have a glass of wine, or a joint, or a big delicious blob of heroin to silence your silly brainbox of its witterings, but there has to be some form of punctuation, or life just seems utterly relentless." I love every word of this passage. "Witterings" is made up but we know exactly what he means. "Punctuation" is the perfect term for those little rituals that create some sense of rhythm to our days. And he makes a really truthful and surprisingly painful observation with "life just seems utterly relentless."

It's this combination he pulls together—the lightheartedness of "silly brainbox" and the heavyheartedness of "relentless"—that is so powerful. In another passage he reminds us that the French describe orgasm as a "little death" and says that's what it is for him: "a little holiday from my head." This passage touches on his sexual appetites, which are usually a topic of sport or humor, but then throws in "holiday from my head," which most of us can relate to as the serious issue that it is. And he concludes with a funny: "I hope death is like a big French orgasm."

A third virtue is that Brand is (now, at least) a man of essentially good will. Of all the many, many people he discusses in the book, he has harsh words for very few of them. He has a generous disposition toward others. And because he's creative, he's not clichéd in his thinking any more than in his writing: "I didn't want to go to that treatment center, but all the do-gooders—and I mean that literally, as they did generally do good (I've never really understood why people employ the term pejoratively)—they all insisted, and I sort of, kind of agreed." This is his essential creative mind coming out: rehabilitating the term "do-gooder" is a much more radical act of unconformity than, say, taking heroin.

The trickiest part of a memoir is getting the tone right, especially toward your parents and your child self. He's brilliant at this: He puts you right in the mind of the inexplicable little shit that he was, making you feel how he did: that he wasn't trying to be bad or mean (who ever is?) but sometimes he couldn't help himself. He didn't even understand it himself. As adult after adult becomes disgusted with him (and later as woman after woman becomes disgusted with him), he recalls their reactions with equanimity and understanding, even while reserving some sympathy for his child self.

As for his parents, he notes his absent father's faults but also his strengths. And his mother he loves to pieces. Writing about when he was learning to talk, he writes, "My childhood can't have been that bad if someone loved me enough to document my first words."

I could go on and on, but I'll just say: Whether or not you like Russell Brand (or even know who he is), if you like language, this is the book for you.
Email ThisBlogThis!Share to TwitterShare to FacebookShare to Pinterest