E. B. White famously wrote, "I arise in the morning torn between a desire to improve the world and a desire to enjoy the world. This makes it hard to plan the day."

To plan a life too. And a politics. I thought about White's quote after a friend posted a link online to a short article in The Atlantic about wealth distribution. Among the people who responded to his post was a woman in a high-paying career. Here is what she wrote:

"You begin by recognizing that there has always been, and will always be, a 'wealthy' class. No matter how far we can go back in recorded history, this has been so. Why are we now preoccupied with redistribution of that wealth? It will never happen. The only thing that can happen is that the wealth is transferred, temporarily, inappropriately and/or coercively from one who does have it written in their 'Book of Life' to one who does not have it written there. To see the future, we have only to look at the past. The past has proven that the wealth always returns to the rightful heirs. May God help us all."

While you stop to deal with your rising nausea, let me home in on this part in particular: "No matter how far we can go back in recorded history, this has been so. Why are we now preoccupied with redistribution of that wealth?" I imagine this woman looking back at the stretch of recorded history, all those millennia during which the rich got up in the morning and enjoyed their wealth guilt-free. The Greek landowner who set his slaves to work each day and capped off the night with a banquet and courtesans. The Roman patrician who looted the European countryside and came home to his estate, library, and wine cellar. How lucky they were to have no troublesome wrinkles in the cloth of their consciences! To be so fully enfolded in their warm and reassuring culture of their peers!

Unfortunately for this woman, she has been cursed with living in an era in which concern for injustice is the central thrust of all serious intellectual and spiritual activity. Our titans of industry devote their billions to health care around the world. Our entertainers spend their off months walking the dusty camps of Darfur.  Our literary awards go to those who poke at the world with a stick, looking for those nooks and crannies where good is being attempted or evil can be exposed. And our daily lives, from the products we consume to the trash that we entomb, from the words we use and the assumptions we assume, are subjected to a continual ethical testing. Should we eat veal? Should we buy sweatshop clothes? Can we say "retard"? Should we say "bitch"?

It's annoying, really, the constant, hovering presence of conscience, and yet we have gotten off relatively easy thus far. Nothing in a middle-class American life compares to the moral demands of the past and those being made daily in other parts of the globe. The World War II era provides case studies. For example, the New York Times today carried a review of a new volume of the letters of P. G. Wodehouse. Reviewer Charles McGrath noted that Wodehouse was mostly interested in writing and spending time with his Pekingnese lapdogs. He writes:

"The evidence in the letters suggests that his political naïveté bordered on moral obtuseness. While the war was going on, Wodehouse made a deal with a German film company, for example, to develop his novel “Heavy Weather” into a movie. And in the letters he wrote from the Adlon Hotel—Berlin’s most luxurious—after his release from camp, he treats the war mostly as a personal inconvenience, with seemingly no awareness of Hitler’s genocide or of the thousands of lives being spent on both sides."

This review in turn made me think of the excellent documentary about Leni Riefenstahl, the German filmmaker who socialized with Adolf Hitler and directed Triumph of the Will. The documentary, called The Rise and Fall of Leni Riefenstahl, describes her rising career as an actress and filmmaker and how she brushed aside her few quibbles about socializing and even collaborating with the Nazi establishment. Riefenstahl was not a monster. She was simply a woman who loved her life and found the moral challenges of her day not to her liking.  She preferred that history not interfere with her plans for a fabulous life.

No one can live a perfectly moral life, and agonizing over every action can lead only to madness. But it's a privilege to live in a time when we are alive to the reality of others, and an honor to be even a small part of the struggle for a more just world. 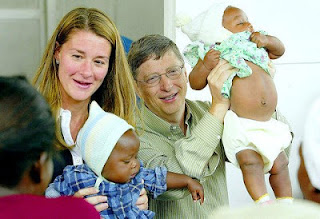 Bill and Melinda Gates working on vaccinations in Africa 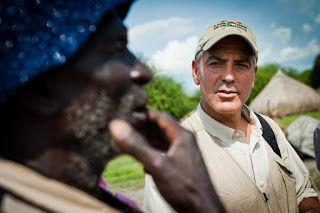 George Clooney in Africa, working with his foundation Not On Our Watch 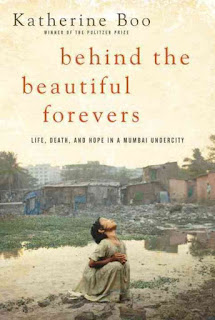 Behind the Beautiful Forevers: Life, Death, and Hope in a Mumbai Undercity,
winner of the National Book Award