The Female Thing, by Laura Kipnis 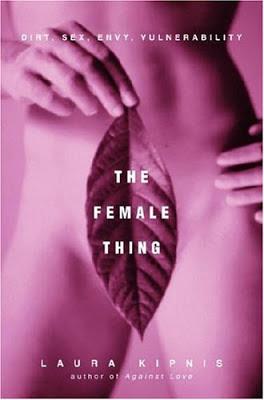 I read this book because Kipnis is a somewhat well-known feminist academic and I wanted to be familiar with her work. In it, she looks at the dilemmas of being female and the ways in which progress has been both positive and troubling. But the book's a slog, for several reasons.

First of all, she seems to be writing from about thirty years back. The book was published in 2006, but her evidence (she cites, for example, Men Are from Mars, Women Are from Venus) and her arguments ("the leitmotif of today's 'You go, girl!' sisterhood is blanket scorn for the male sex") are way passé.

She's a Freudian and sees human behavior as subconscious compensatory actions.  So we have statements like this:  "Of course, husbands and babies have been the traditional—and not entirely unsuccessful—mechanisms for assuaging any nagging sense of female incompletion." And "It's the psyche's job to transform the body into metaphors that encapsulate social relations." I kept writing "IS IT??" in the margins.

Her idea of what's going on with women also seems wildly inaccurate. I can't figure out if it's because she's writing what she knows (i.e., this is what her friends are like) or what she imagines (i.e., this is what she imagines people who aren't her friends are like). For example, she describes two dinner parties: One is composed of married people where the women are constantly rolling their eyes and making cutting remarks at their husbands' stupidity. The other is composed of single women who express how badly they want a traditional man who's take-charge and sexy. And, again in the margins, I write: "Where are these dinner parties she's attending??" Everywhere it's duality: women are either stay-at-home moms or careerists, shrews or repressed.

Kipnis argues that women experience a deep sense of incompletion, which they look to men to fill and which men are singularly unable to fill. I'm not convinced, though, that this sense of incompletion is specific to women or particularly Freudian. Don't we all have a sense of incompletion in life due to being, you know, human? Kipnis tosses off a passing reference to "pair-bonding" as one possible response to our longing, but it doesn't seem to occur to her that many people do indeed find pair-bonding to be fulfilling. Yes, there's lots of divorce and misery in relationships, but the world is also filled with people who are happy together, raising children, cheering at soccer games, laughing in the car as they run errands, snuggling up at night on the sofa. It's like a world that she has no familiarity with. And the idea that a woman could be fulfilled, not by "men," but by a particular man—because he's good company, understands her well, is able to be intimate, shares her sense of humor—never occurs to her.

It would help if her writing were better. She writes in a very common style these days, combining academic discourse with great informality. I like this style when done well; it's the kind of writing you find on Jezebel and other blogs and websites. But for a whole book? It gets old. And she's not good at it. The style depends on wit, but Kipnis has the mechanics of the style without the wit. Here's an example of her being clever, in this case regarding women's concern about their looks: "The latest: extreme makeovers, extreme plastic surgeries—and consider having yours done on national television!" Yikes. That's corny.