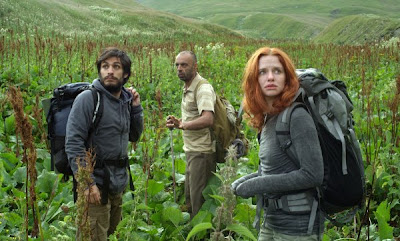 Julia Loktev directed this knockout of a film, about a couple backpacking in the Caucasus. It's a movie that, like Terence Malick's The Thin Red Line, puts the viewer in an unaccustomed rhythm: plodding, quiet, often beautiful, often deadly boring---just like backpacking, in fact. 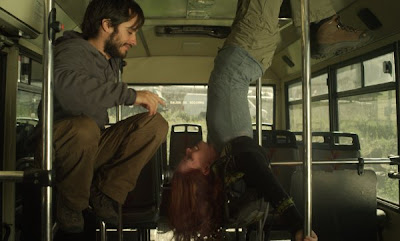 Loktev wrings an amazing amount of tension and suspense from the plainest of scenarios: the couple walking down a street, having a drink at a local bar, goofing off. This is partly because it's a movie, so you know something is going to happen. It's partly because young idealists and confident women usually get their comeuppance in film. It's partly because of the filmmaker's skill in creating that tension, exploiting the isolation of the settings, the untranslated dialogue, music and lack thereof. Camera angles contribute too: once the couple begins their backpacking outing proper, with the local guide, the film alternates between grand vistas that dwarf the protagonists and tight-angle shots of just their legs and the rocks, which besides feeling claustrophobic mimics precisely the experience of hiking in rocky terrain where you really are just staring at the path directly in front of your feet for long periods of time.

If I had to depict the structure of the film graphically it would be something like this:

That's really all I can say about it except that the filmmaker does not squander your trust, doesn't go off on some crazy tangent, and doesn't fall back on movie cliches. This movie is different, and that's reason enough to see it if you like film. 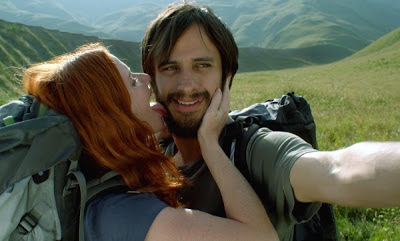 Another reason to see it: the actors. Loktev was smart in realizing that, if you are going to have to stare at two people doing very little for two hours, it helps if they look like Gael Garcia Bernal and Hani Fursternberg. Gael Garcia Bernal has got to be one of the most talented actors on the planet, and his performance here is a wonder of naturalistic acting. Hani Furstenberg is maybe a little too expressive; I wish she had dialed it down just a degree or two. But like Gael, she's got a face that's fascinating to look at. Bidzina Gujabidze is not quite as comely, but it's almost impossible to believe that he is not the person he's portraying on screen. He's that good, and his alternating familiarity and foreignness add to the tension, subtly but powerfully.