The Unbecoming of Mara Dyer and the Present of YA Lit 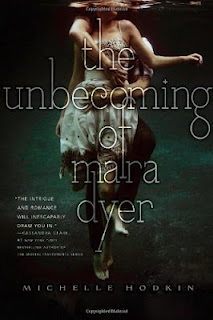 So I'm reading this YA novel and enjoying it. It's standard fare: teenage girl is "plain" but attracts the attention of the most handsome, charismatic boy at school, along with the devotion of a more normal, sweet guy. She's battling intense personal situations (a move to a different state, the death of three friends in a mysterious accident, an alpha girl who harasses her). Many YA authors try to distance themselves from Twilight, but the differences are often superficial: their heroines may cuss, have a cynical sense of humor, or be extra "feisty." But, below the surface, the structural similarities, even in novels like The Hunger Games, are solid: the two adoring suitors, the girl heroine who tends to be querulous (she protests, he smirks), the constant sacrificial gestures on the part of both..

It's funny to think that, one day, this whole fantasy / apocalyptic / supernatural romance genre will be passe and NO ONE will be writing them for years and year to come (until the genre comes back, as they always do). When I was a teenager, it was all uber-realistic tales of divorce and protagonists who were vulnerable and not always up for what life was throwing at them. People tend to have two reactions to strong trends:  get ahead of the curve and look down their noses at them, or embrace them and the communal enjoyment of a cultural moment. I'm in the latter group, for sure.
Email ThisBlogThis!Share to TwitterShare to FacebookShare to Pinterest