The Righteous Mind: Why Good People Are Divided by Politics and Religion

I'm intrigued by this new book by Jonathan Haidt, which has been reviewed extensively over the past week. Haidt was a partisan liberal who now considers himself more of an independent. In this book, he tries to explain our political views as expressions of our values and group identities. 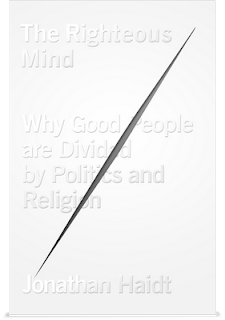 I'm wary of the lengths to which he might take this idea. There are good values on both right and left. But not all political views come from a healthy place. There are conservatives railing about the importance of self-sufficiency while actually depending on others to an egregious degree. There are liberals railing about the scourge of poverty while actually living a life of complete self-indulgence. In both cases people are using political views to shape a vain self-image: how they'd like to be perceived (tough bootstrapper, man of conscience) rather than how they are.

And we can't ignore the ignorance and bigotry that gets expressed in politics either. If 50 percent of the population in a southern state believe that Obama is a Muslim, they are not expressing values that are different from but equally valid to their opponents. They are embracing a lie that is intended to injure. And if a conservative stalwart says "I'm sick of hearing about the gays all the time," there's something beyond a healthy respect for tradition going on. And if a person goes on Twitter and says she's mad that the character of Ru in The Hunger Games movie is played by a black girl, it may come out of very instinctual tribal defensiveness but it's an instinct that cannot be allowed to flourish unexamined if you want to be considered a good person. So how much of partisanship is "good people" defending equally valid values, and how much is good people pitted against people who are actually bad?

Haidt rightly trumpets the importance of intellectual openness, what he calls "ideological diversity." Being in conversation with people who think differently than you is the only way to find truth because your ideological opponents will search for contradictory evidence in a way you never will. Point granted. But what if one ideology is inherently more open to contradictory evidence and the other is rabidly closed off to it? Liberalism has its shibboleths and blind creeds, but it seems to me closer to the kind of intellectual openness that Haidt prizes. One impressive exception to the rule: the conservative atheist Christopher Hitchens, who impressed not because he was an atheist but because he was a conservative who insisted on the freedom of the smorgasbord rather than committing to the whole prix-fixe feast.