There's lots to love about the Hunger Games movie, above all the perfect casting and a screenplay that condenses the novel skillfully. There were other artistic touches that were even more unexpected. 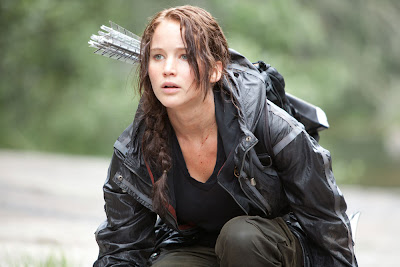 One was the respect with which the director approached the audience and the subtlety that allowed. For example, at the Reaping ceremony, the Capital officials speak as if it's all great fun and sporting. When the camera cuts to the reaction shot of the District 12 citizens, their faces are unwaveringly serious and tense. But there's no rolling of eyes, sneers, or muttered comments to smack the viewer upside the head with the contrast between the rhetoric and the reality. This kind of scene occurs several times in the first half of the movie, and the director never gives in to the temptation of the cheap reaction shot.

Another nice touch was the amount of quietness in the film. Like the last Harry Potter movie, there were so many scenes of silence or near-silence. Between the chatter of smart-aleck comments, the constant manipulations of soundtracks, and the ever-growing fear of boring the audience that most movies evince, this constitutes a real act of courage on the part of the moviemakers.